2nd President of Croatia and 14th President of the Presidency of Yugoslavia, Stjepan Mesic is 4th GOD Awards "Europe's Dignitary Man of the Year" 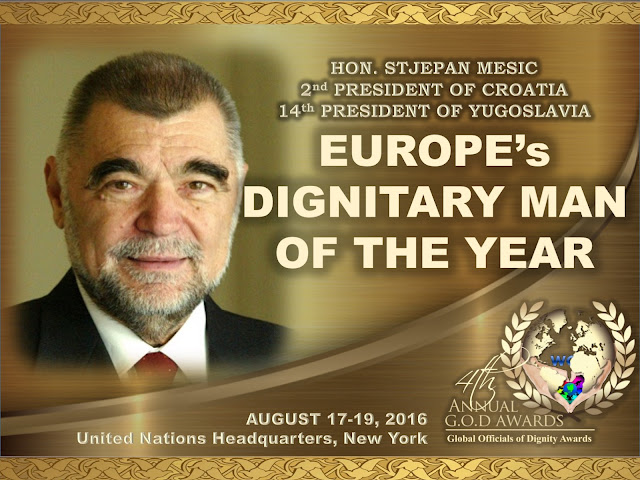 2016 is a very exciting year for We Care for Humanity (WCH) and the 4th G.O.D. Awards as the roster of high profile honorees for the much awaited humanitarian awards gets better as the event day approaches.

Among the VVIP's being honored at the said awards is Croatia's 2nd President and The Presidency of Yugoslavia's 14th President, His Excellency Stjepan Mesic. "I have met His Excellency in person twice; in Korea and in India. Both times I heard his strong views on peace and human rights which present sustainable solutions to global issues especially on the side of Europe. We at WCH are very honored to confer the EUROPEAN DIGNITARY MAN OF THE YEAR to His Excellency Mesic for his contribution to his people, to his country and to humanity", proudly said by Princess Maria Amor, founder and president of We Care for Humanity.

Former President Stjepan Mesic will be honored at the 4th Global Officials of Dignity Awards(G.O.D. Awards) and scheduled to speak at the 3rd WCH Humanitarian Summit on August 17-19, 2016 at the United Nations Headquarters, New York. Both flagship events are organized by We Care for Humanity and its philanthropic partners: SREI Foundation, J & B Medical Company, HWPL and China-US Business Association.

Graduated from the University of Zagreb in 1961.

During his studies was a prominent student leader.

1965 . - Enters political life as a member of Parliament in the Federal Republic of Croatian (the Parliament) when the list of citizens elected as MP

In the early 70s , for his involvement in the movement for equality of Croatian in the former Yugoslavia, the so-called. 'Croatian Spring', was convicted and spent a year in prison (Stara Gradiska).

25.08.1990. - The decision of the Croatian Parliament, became a member of the Presidency of the Socialist Federal Republic of Yugoslavia

07.09.1992. - 05.24.1994. - He is the President of the Croatian Parliament (sacked because he was unhappy with the overall policy of the HDZ, especially policy towards BiH, left the HDZ and founded a new political party - the Independent Croatian Democrats (HND).

1997 - after the split in the HND, with most members of the CJA enters the Croatian People's Party, and served as executive vice president of HNS and the President of the Zagreb branch of the same party.

7 February 2000 - elected President of the Republic , followed by wanting to be the president of all Croatian citizens, left the party.

He speaks Russian and French.