A Visionary and Silent Philanthropist, Thomas William To be Honored at the 4th G.O.D. Awards in New York 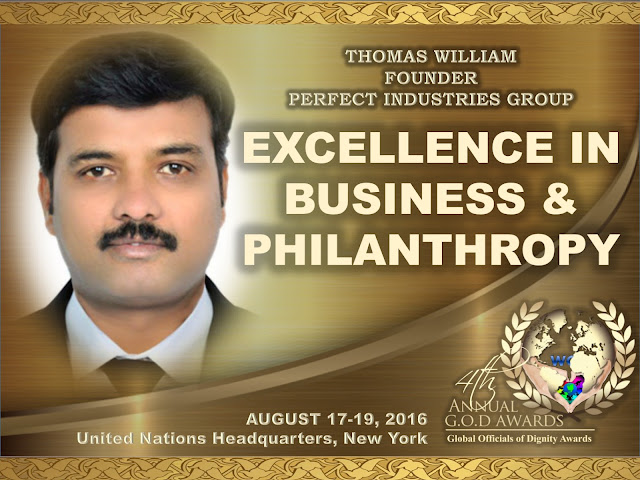 When it comes to business and Philanthropy, Mr. Thomas William is no neophyte at all. He can run multimillion dollar companies and quietly give back to the community with flying colors. "We admire the vision of Mr. Thomas, with his business acumen and philanthropic spirit he is undoubtedly making an impact to the world", said Princess Maria Amor, founder of We Care for Humanity (WCH), the founding organization of the G.O.D. Awards. "This 4th year of the GOD Awards, It is with great pleasure to recognize Mr. William with Excellence in Business and Philanthropy Award for all the contributions he doing for humanity", she continues.

Mr. William will be honored at the 4th Global Officials of Dignity Awards(G.O.D. Awards) and scheduled to speak at the 3rd WCH Humanitarian Summit on August 17-19, 2016 at the United Nations Headquarters, New York. Both flagship events are organized by We Care for Humanity and its philanthropic partners: SREI Foundation, J & B Medical Company, HWPL and China-US Business Association.

The man behind the Perfect Industries Group is none other than its founder and Managing Director Mr. Thomas William. A great & firm believer & follower of his own ethics, values, crafts and principles. He moves selectively & meticulously on pre-fixed, preset, well-planned & defined path ensuring hundred percent achievements.

He was born to a business man Mr. Selvaraj and a school headmistress Mrs. Sebastine in April 06, 1970 at Thevaram in Tamil Nadu, India. His family relocated to Chennai where he commenced his education. After completing his Civil Engineering in AMIE, he launched his vision on overseas career. Later he completed his MBA from Cyprus University.

After being employed for a shorter period in U.A.E, he was not able to limit himself to a circle. Foresightedness & vision in part of his character & habit and then embarking at once upon it, is his strength to succeed. He is the master of an agile personality. He launched his maiden company- Perfect Industries LLC in Dubai, United Arab Emirates in 1997. It was the flagship of the Perfect Industries Group and encouraged with the rapid progress and growths, zeal and ambitions for prospects, he diversified into Coil Coating plants, Civil Contracting, Stainless steel Process Equipments, and Turnkey projects.

In 2010, he launches yet another company, mother of all companies, M/s Perfect Polymers that is manufacturing chemicals. Not confining to the Middle East limits, he launched the steel fabrication company, M/s Perfect International Fabricators Pvt Ltd in the State of Tamil Nadu. Upon commencement, in few years the company turnover had increased to the figure of multi crores and was appreciated by BHEL. Perfect Industries Group is a multifaceted group with annual turnover of over USD 260 million.The Group now comprises of nineteen companies with operations in six countries, exporting products and services to nine nations. Thomas William, Managing Director in the core, established offices in U.A.E, Kuwait, Italy, Bahrain, Saudi Arabia and India.

He helped the organization to adopt a working- culture of ceremonial standard where sense of frolics and enjoyments has strong presence. Recently, he was facilitated by Sharjah Chamber of Commerce for being one of best 50 exporting companies in Sharjah. He is far away from fancy & frills. Simplicity is his character.

Nourished and nurtured with donar genes, he very much enjoys in extending generous help to genuine with due care that others do not come to know of it. With such kind of greatness in character, he makes himself stronger when at work, polite when dealings with workers. He is part of many charity programs conducted by NGOs and regional Churches. He has his own trust established in his birthplace in Thevaram, Tamil Nadu for the welfare the locals.

His varied experience gave him an opportunity to work with underprivileged women, children and people without sight. He has keen interest in working towards upliftment of women and Children. His varied experiences in career and personal life have enabled him to empathize with people from various sectors. In Tsunami aftermath in 2004, he silently contributed and co-ordinated the relief works without any advertisement. He is assisting the poor by providing jobs to the educated and unemployed youth in the deprived community in his group of organizations by furnishing free on-jobs training for the 1st year and then absorbing them into mainstream.

He shares margin of his fortune with workers, contributes hefty to social associations and actively participates in community services.