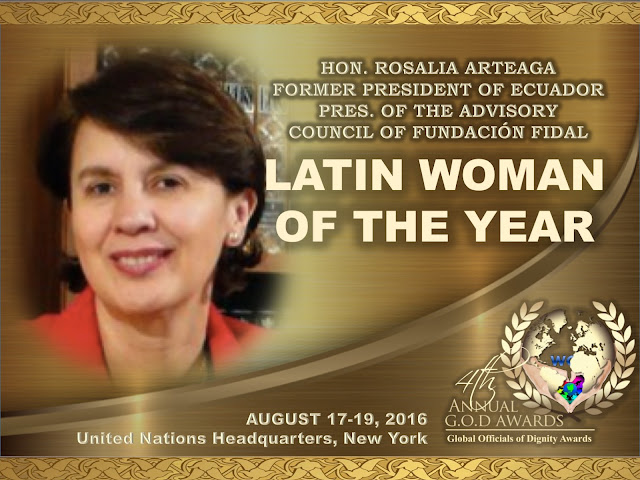 We Care for Humanity (WCH) is gearing up again for the annual celebration of the Global Officials of Dignity (G.O.D.) Awards which is now on its 4th year. Each year, they pick the finest humanitarians in different sectors of the society to honor at the very place which fosters unity and peace, the United Nations. "We are very honored that this year's Latin Woman of the Year Awards is accepted by Hon. Rosalia Arteaga. We can't think of anyone from the Latin American region more deserving of the award. Her dedication to serving humanity even after her terms as President and Vice President of Ecuador should be recognized for other women-in-power to follow and make a great example." said, Princess Maria Amor, founder of WCH and creator of the GOD Awards.

Rosalía Arteaga is the former President and Vice President of the Republic of Ecuador (1997). She is a Doctor in Jurisprudence and Lawyer, Graduate student of the School of Journalism and has a Master's degree in Anthropology. Positions she has held include: General Secretary, Amazon Cooperation Treaty Organization ( ACTO ) 2004 – 2007, Minister of Education, Culture and Sports (1994), Member of the Board of Directors of Catie – Agronomic Tropical Center of Investigation and Education in Costa Rica, President of the Latin American Foundation for the Integration and Development – FIDAL, and President Executive of "Arteaga - Serrano" Productions.

Rosalia currently serves as Executive Director of Fundacion Natura Regional. International forums have included events in Austria, Rome, Chile and lately she has lectured at the economic forum in Montreal, STS Forum in Kyoto, and campus de excelencia in Madrid.
​
She has published numerous books and works with several newspapers and publications in Ecuador and abroad, and has received numerous decorations, Decoration Rio Branco , “Grado de Gran Cruz” – Government of Brasil, The Green Award of the Americas Award, the Rio Branco decoration at the highest level, and was recently declared Emeritus Administrator of the Amazon by UNAMAZ. She also received the recognition of USAID for her service to the Amazon Region.