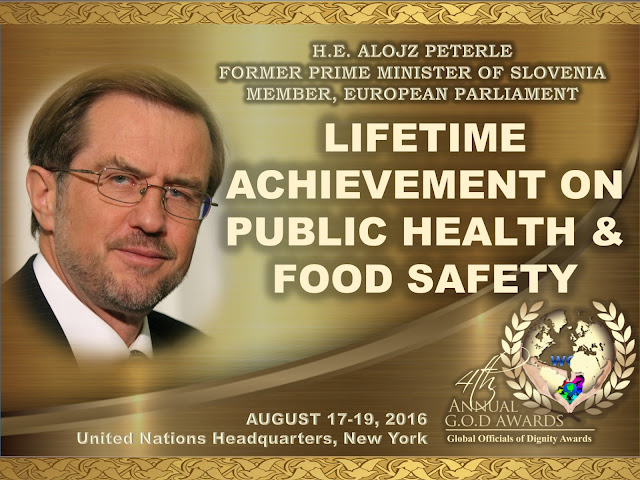 Peterle recently attended the World Culture Festival in Delhi, India upon the invitation of Art of Living founder, His Holiness Sri Sri Ravi Shankar, where he met Princess Maria Amor, the founder and president of We Care for Humanity (WCH). "I admire the background of His Excellency Peterle especially his advocacy on Health. We at the G.O.D. Awards are very honored to confer him with Lifetime Achievement Award on Public Health and Food Safety.", said by the princess.

Alojz Peterle will be honored at the 4th Global Officials of Dignity Awards(G.O.D. Awards) and scheduled to speak at the 3rd WCH Humanitarian Summit on August 17-19, 2016 at the United Nations Headquarters, New York. Both flagship events are organized by We Care for Humanity and its philanthropic partners: SREI Foundation, J & B Medical Company, HWPL and China-US Business Association.

Chairman of the Parliamentary Commission for European Affairs (1996).

Chairman of the Council of the New Slovenia-Christian People’s Party (2001-2005).

Elected representative of the National Assembly to the European Convention and elected member of its presidency (2002-2003).

Elected Member of the European Parliament since 2004.

Personal Representative of the Chairman-in-Office of the OSCE for Central Asia (2004-2005).

Co-chair of informal all-party forum “MEPs Against Cancer” and the WG on Health.

​He has received a number of prestigious awards, including European Voice’s European of the Year in 2003, a gold medal from the Luxembourg foundation Mérite Européen in 2004, the Bulgarian APOZ Award 2009 for his contribution towards fighting cancer and The Parliament magazine’s MEP Award for Health and Food Safety in 2008 and 2014.
Posted by HUMAN-i-TV at 3:22:00 AM