Grand Master of OSJ Knights of Malta To Be Conferred as Noble Man of Europe at the 4th G.O.D. Awards 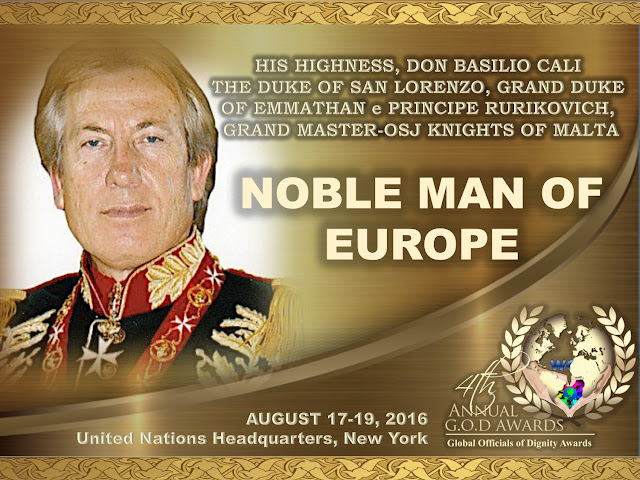 Italian born Don Basilio Cali, the reigning Grand Master of the historical Order of Saint John of Jerusalem of the Knights of Malta will be participating in the slated 4th G.O.D. Awards in New York.

Her Highness Princess Maria Amor announces Cali to be conferred as the Noble Man of Europe in the said international humanitarian awards. "Being the Minister of International Cooperation and Integration of the OSJ Knights of Malta, I work very closely with the Grand Master. I have seen his natural compassion to the needy and his dedication to the Order's mission and vision. He is a noble man inside and out and his nobility is evident in the realm of the Order.", said Minister Amor.

Don Basilio will be honored at the 4th Global Officials of Dignity Awards(G.O.D. Awards) on August 17-19, 2016 at the United Nations Headquarters, New York. This flagship event is organized by We Care for Humanity and its philanthropic partners: SREI Foundation, J & B Medical Company, HWPL and China-US Business Association.

About Don Basilio Cali:
Qualification: Diploma in Surveying and Engineering Graduate in hc.
Nobility titles: Count of Val Lenforte, Marchese di Val Leon strong, Duke of Rodez, Duke Castel fort, Duke of San Lorenzo, Duke of Jesidàn, Grand Duke of Emmathan
and Prince Rurikovich
Honorary titles: Honorable Degree Honoris Cause of "Pro Deo University-USA."
Honorable Degree Honoris Cause of "Cambridge University.
Professional work:
1967 - 1974 Owner of a Construction firm with 30 workers.
1974 Responsible for the safety and management of the Group Mario Ferrini.
1976 - 1993 Head of the television circuit, Telesud - Antenna 10 - Channel 5.
1993 - 1995 Chairman of the Company " LICA PUBBLICITAS " in Catania.
1995 I carry out the activities of the Broker profession.
1996 - 2014 I take care of the activities of the Order Management and Humanitarian O.S.J.Malta.