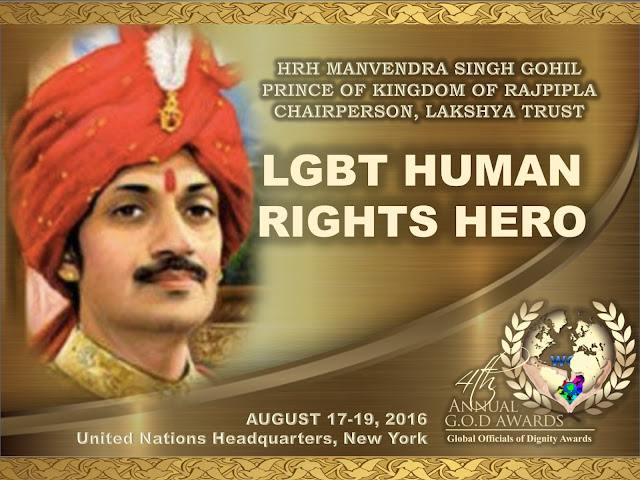 Chairperson and Co-founder of Lakshya Trust, the 1st organization in Gujarat to work on HIV prevention amongst MSM (Men having sex with Men) and Transgender populations (www.lakshya-trust.org), His Highness Prince Manvendra Singh Gohil is set to go to United Nations to receive an award!

"Prince Manvendra's advocacy in fighting for the rights of "Lesbian, Gay, Bisexual and Transgender (LGBT)" community is widely known and has reached us at the GOD Awards, that is why we, at the honoree committee didn't think twice to bestow our very first award for the LGBT Human Rights Hero to His Highness", said Princess Maria Amor, founder and president of We Care for Humanity. She continues, "I think it is high time that we recognize those who are doing big impacts and sacrifices for the welfare of our brothers and sisters in the LGBT community, and may this serves as a strong message to all that we at We Care for Humanity embrace and respect sexual diversity".

The prince will be honored at the 4th Global Officials of Dignity Awards(G.O.D. Awards) and scheduled to speak at the 3rd WCH Humanitarian Summit on August 17-19, 2016 at the United Nations Headquarters, New York. Both flagship events are organized by We Care for Humanity and its philanthropic partners: SREI Foundation, J & B Medical Company, HWPL and China-US Business Association.

About H.H. Prince Manvendra Singh Gohil
Manvendra was born at Ajmer, 23 September 1965, as the son of Maharana Shri Raghubir Singhji Rajendrasinghji Sahib, who inherited the title of Maharana of Rajpipla in 1963. The princes were derecognized by the Republic of India in 1971. Therefore their residence Rajvant Palace has been converted into a resort (Several Royal Palaces have been converted into Resorts, Universities and Government buildings after the derecognition by the Republic of India). Manvendra had a traditional and conservative upbringing. He was educated at Bombay Scottish School and at Amrutben Jivanlal College of Commerce and Economics, Vile Parle, Bombay.

He was the first member of a royal family to openly come out as gay in media in March 2006 which sent shock waves all over the world. Interviews appeared in all major newspapers/ TV/Radio channels all over the world. He was the 3rd Indian to be invited by Oprah Winfrey to Chicago for the show "Gays around the World" in November 2007 and the only Indian to be invited for the 2nd time for her farewell season in Jan 2011.

Among his achievements are: winning the prestigious UNAIDS Civil Societies Award 2006 on behalf of Lakshya Trust for outstanding contribution towards HIV prevention amongst MSM population, winning the distinguished 2010 Global Citizenship Award for Leadership in Helping Humanity by Orphans International Worldwide in New York on 28th Feb 2010, the 1st Asian to be one of the opening speakers in Euro Pride held in Stockholm in July 2008 and to lead the world's largest gay parade at Sao Paulo, Brazil in 2009, being nvited as Guest Speaker for Baroda Management Association, TedX Conference at Ahmedabad, Rotary Clubs of Ahmedabad Metro, Vadodara, Mumbai, the only Indian Prince selected to do a documentary film for the BBC called "Undercover Prince" released in Feb 2009. He has also been part of several documentary films on Homosexuality and HIV/AIDS like "Breaking Free" and "Bolo Project" in India, "I AM" in Canada, "Sex du la Monde" in France and currently a documentary film is being made in USA.