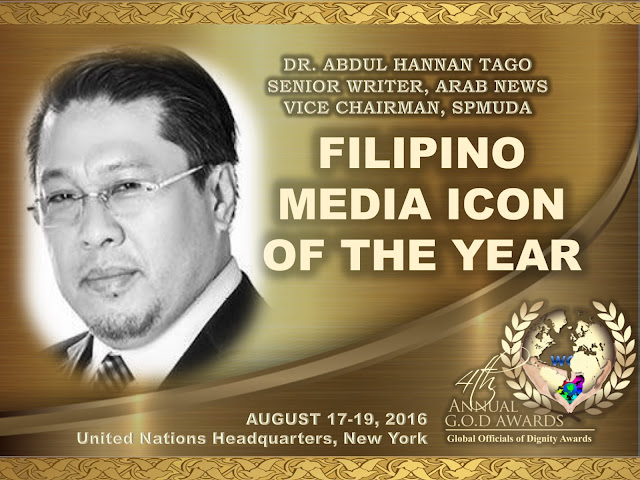 Dr. Abdul Hannan Tago, SPMUDA Vice-Chairman and Senior Staff Writer of Arab News will be conferred as Filipino Media Icon of the Year at the 4th Annual G.O.D. Awards.

Tago is considered most influential Filipino in the Gulf as Media’s Filipino Custodians.  For more than 25 years his gave tireless services for OFWs and bring their plight and clamor into light and eventually solution. That was apparent when he and other OFWs saved the life of the Filipino in the death row, Rodelio :Dondon" Lanuza.

"I understand the power of media and one thing I admire about Dr. Tago is he uses that power to help humanity especially the Filipinos. I witnessed how he played a big role in the winning of Filipino favorite mayor Rodrigo Duterte for president of the Philippines. With his leadership and perseverance, he helped him won by landslide in the Middle-East.", testified Princess Maria Amor, founder and president of We Care for Humanity (WCH).

Dr. Tago will be honored at the 4th Global Officials of Dignity Awards(G.O.D. Awards) on August 17-19, 2016 at the United Nations Headquarters, New York. This flagship event is organized by We Care for Humanity and its philanthropic partners: SREI Foundation, J & B Medical Company, HWPL and China-US Business Association.

About Dr. Abdul Hannan Tago:
Dr. Abdul Hannan Tago is the first Filipino multilingual journalist with deep insight into Arabic culture and Middle East affairs. He has been working in Saudi Arabia for the past 25 years plus 9 years study in Cairo Egypt.

He obtained his BA in Arabic literature, with a major in Mass Communications and Public Relations from Al-Azhar University (Egypt) and MA in Political Science from Arab League Institution - Cairo (Egypt).

On September 12, 2012 he was awarded the title, “Doctor of Humanity AUGP Ambassador of Goodwill of Peace, Kingdom of Saudi Arabia” with the approval of the AUGP Board of Directors, Founder and Chairman Most Rev. Dr. Madhu Krishan.
Milestones in my career as a journalist

• I was asked to cover the historic visit of Chinese President, Xi Jinping, to Saudi Arabia on Jan 19-20 this year to produce an 11- page special supplement on his visit. It was a print media record unprecedented in terms of media coverage for such a high profile event at the international level.

• Most Influential Filipino in the Gulf and Media’s Filipino Custodians

• A Dubai-based magazine “Illustrado” has chosen him in its 2015 special issue among the top 100 Most Influential Filipinos in the Gulf with a title “Media’s Filipino Custodians” (http://www.illustradolife.com/most-influential-filipinos-in-the-gulf-abdul-hannan-tago-medias-filipino-custodians)

• Author of the ‘Arabic Future and its Importance for winning Arab hearts’, a book in Arabic language brought out by King Abdullah International Center for Arabic Language.

Thanks to his Arabic academic background and professional experience in a leading English daily in Saudi Arabia, he often represents not only his paper but also the Saudi media in high profile regional and international conferences on political and economic issues as well as on tourism.

Recently he was invited by the Kazakhstan government, making him the only media representative from Saudi Arabia to cover the country’s presidential election.
Peace and Humanity advocate:

He is currently Vice-Chairman/ Board of Directors and Senior Vice-President for International Relations and Cooperation with the rank of Goodwill Ambassador to Saudi Arabia for SPMUDA International, an NGO based in the Philippines and recognized by the United Nations.

Recently he was appointed as CEO of a Mindanao-based NGO for peace, “Bangsamoro International Solidarity Conference” (BISC).

He recently created a Riyadh-based Filipino Expatriates Council for Justice and Peace or Fil Expats Council.

The council serves as a consultative body of all peace-loving Filipinos in Saudi Arabia through their organizations which primary advocacy is the promotion of peace and order in Saudi Arabia considered to be Filipinos second home.

It also fosters solidarity with the Saudis, and promote Filipino Muslim-Christian brotherhood. A task force Counterpart or partner of the Philippine Embassy in disseminating relevant information affecting OFW’s especially during crisis management and other contingency measures.

Dr. Tago is the Founder and President of the Integrated Mindanao Economic Forum (IMEF) based in Riyadh. He was also nominated as the Philippine Ambassador to Riyadh in 2010 for his role in cementing Saudi-Philippine relations.

Presently, he is working with Arab News, the leading newspaper in the Middle East, as a senior staff writer. In this capacity, he was invited by many Saudi Arabia’s friendly countries in the Middle East, Asia and Europe, as a member of the media team from the Arab and Gulf countries.

He was the lone Arabic-speaking Filipino journalist among the Arab media representatives. Hannan’s fluency in Arabic has provided him with a medium through which he has won friends and influenced people, both from government and private sectors.

Abdul Hannan is also the only Filipino journalist who can write in chaste Arabic. He is, in fact, a regular contributor to leading Arabic newspapers in the Middle East.

His articles appear in well-known publications like Al-Sharq Al-Awsat and Al-Eqtisadiah frequently, besides other Arabic newspapers. He appeared on Saudi TV both in Arabic Channel and the English service (Channel 2), where he dwelt on current issues in Saudi Arabia.

It is no mean achievement that Abdul Hannan has been selected as one of the guest speakers at the 2nd Annual Saudi Broadcasting Forum which held in Riyadh on 29-30 September, 2012.

Abdul Hannan has 33 years’ experience under his belt in the Middle East, of which eight years were devoted to academic studies in Cairo, and 25 years in Saudi Arabia.

He worked with Saudi government’s stocks regulator, Capital Market Authority (CMA), and the Saudi Stock Market in its Media and Investment Awareness Department for two years.
Posted by HUMAN-i-TV at 5:29:00 AM