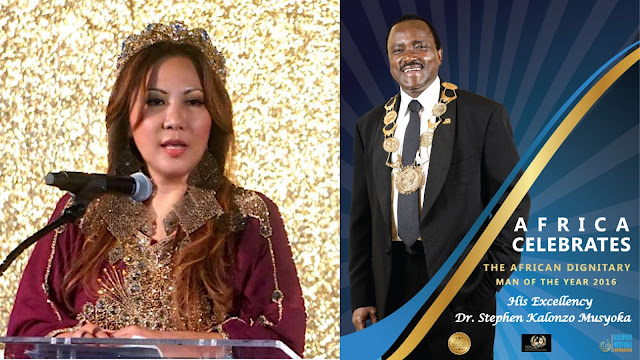 Two months ago, Kenyan Immediate Former Vice President, His Excellency Dr. Stephen Kalonzo Musyoka was summoned to the United Nations, New York to receive humanitarian award from We Care for Humanity(WCH) in collaboration with the Permanent Mission of Benin to the United Nations.  The award, "Africa’s Dignitary Man of the Year" under the platform, the Global Officials of Dignitary(G.O.D.) Awards was conferred to Kalonzo on the basis of his unequivocal contribution to humanity through his organization the Kalonzo Musyoka Foundation.  Previous title holder of the award in 2015 was Zambia’s founding President, His Excellency Kenneth David Kaunda.

Her Highness Princess Maria Amor Torres, Foreign Minister and Protocol Officer of the Royal House of Baloi, the Founder and President of WCH and the Creator and Chairman of the G.O.D. Awards is invited as Guest of Honor in the big celebration of Kalonzo’s award in Kenya “Africa Celebrates Africa’s Dignitary Man of the Year, His Excellency Dr. Stephen Kalonzo Musyoka”. The black-tie affair is said to be held on August 18, 2016 in Nairobi. “I have so much respect and admiration to His Excellency Kalonzo as a leader and as a humanitarian. We are honored at the G.O.D. Awards to have conferred the Africa’s Dignitary Man of the Year which he truly deserves”, said Maria Amor.

The Princess has also invited American-soprano Rachel Hippert to share her talent among the elite guests of the event. Rachel was one of the world class performers of the recent 4th G.O.D. Awards at the United Nations.

While in Nairobi, the Princess will be visiting public schools and depressed communities to be coordinated by WCH Publicity Ambassador in Kenya, Benjamin Musunza.