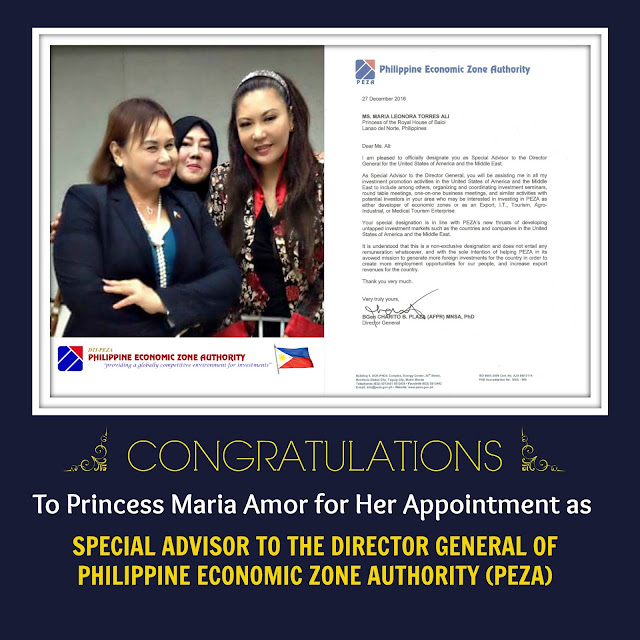 Manila, Philippines ​-Last December 27, 2016, The Philippine Economic Zone Authority (PEZA) released an Appointment Memorandum designating Princess Maria Amor, Foreign Affairs Minister of The Royal House of Baloi and The Royal Kingdom of Sulu, as a Special Advisor to the Director General for USA and Middle-East.

Maria Amor whose strongest quality is being an influencer with vast connections of powerful personalities and who’s who of the world made a statement: “It is a great honor to get an appointment from the government being designated as Special Advisor to the Director General of PEZA. I believe I would be a great addition to the team in bringing impact to our our economy. I have been an active carrier of the Philippine flag to every nation I have traveled to, being the founder and president of We Care for Humanity (WCH), an international NGO based in USA advocating Education, Health and Eradication of Poverty among others, and as the chairman of the Global Officials of Dignity Awards, a humanitarian awards held annually at the United Nations, New York, I have the opportunity to meet world leaders, dignitaries and top businessmen around the world. In my travels on regular basis for humanitarian and business purposes, my exposure to foreign investors is paramount. While building relationships and fostering diplomatic ties, I will always keep in mind the needs of our country to attract business investors, promote our industries and advertise tourism as well.”

In addition, she said “I also want to thank, my brother in good deeds, H.E. Dr. Abdul Hannan Tago, an upcoming Philippine Ambassador to KSA and recipient of 4th G.O.D. Awards Media Icon of the Year, for being the number one instrument for making this appointment possible. His strong recommendation and guidance earned me the trust of PEZA”.  She continues, “My deepest gratitude to Hon. Director General Ching Plaza for giving me the opportunity to contribute my influence and power to serve our country and people".

Ambassador Tago also commented: “I always see the great potential in people especially those living abroad, to be able to bring help and assistance to our economy. We need people like Princess Maria who has unique ability in building relationships and diplomatic ties among world leaders, dignitaries and corporate executives. I have no doubt she can make an impact to the Philippine economy”.

In the words of the PEZA Director General, Hon. BGen. Charito Plaza: “I am please to officially designate you as Special Advisor to the Director General of PEZA for USA and Middle-East. Your special designation is in line with PEZA’s new thrusts of developing untapped investment markets such as the countries and companies in the United States of America and the Middle East, to help PEZA in its avowed mission to generate more foreign investments for the country in order to create more employment opportunities for our people, and increase revenues for the country.”

Amor calls upon her vast connection of business people, “This is the time to invest in the Philippines, being the fastest growing economy in the world right now, under the leadership of our Honorable President Duterte who is tirelessly improving the country’s economy, security and social status, wiping crimes and drugs to make our country great and become a business haven!”.

*PEZA - attached to the Department of Trade and Industry - is the Philippine government agency tasked to promote investments, extend assistance, register, grant incentives to and facilitate the business operations of investors in export-oriented manufacturing and service facilities inside selected areas throughout the country proclaimed by the President of the Philippines as PEZA Special Economic Zones.
Posted by HUMAN-i-TV at 4:07:00 AM