The 5th G.O.D. Awards announces its 2017 LATIN MAN OF AMERICA in the eminence person of His Excellency Vicente Fox Quesada, the 55th President of Mexico. 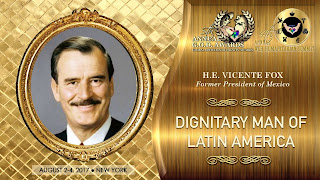 Princess Maria Amor, founder and president of We Care for Humanity and Chairman of the G.O.D. Awards declares: "From growing up on ranch in Guanajuato to becoming the leader of a colorfully diverse, richly cultured and persevering nation, you have always had the heart and concern of your people as a priority. Perhaps it is in your humble and tangible origins that has transformed your love of humanity into a greater and positive lasting impact in our world. An unwavering drive to elevate not only yourself, but the entire country of Mexico. Your compassion for change and transparency honed an amalgamation of skills that are needed to run a government and become what is defined leader.

Leadership, a profound position where true intentions would be revealed by action. What makes you a great leader is having the compassion and determination to manifest your dreams into a goal without malevolence or greed. A rigorous battle to maintain resilience; the ineffable ability to overcome opposition and misfortunes and still, returning stronger than ever, for the sake of fellow paisanos.

Your Excellency, it is your personable and amiable style, your gracious and warming charisma, your numerous endeavors whilst leading the Mexican Nation and your magnanimous efforts in youth education, peace, and leadership advocacy that I have the pleasure to announce that the 5th Global Officials of Dignity (G.O.D.) Awards committee have reached a unanimous decision to recognize His Excellency, Vicente Fox Quesada, as the 2017 DIGNITARY MAN OF LATIN AMERICA. It is our strong belief that your accomplishments and distinct caliber of intrinsic leadership should be shared with and celebrated before the global audience at the United Nations".

​Vicente Fox, in full Vicente Fox Quesada (born July 2, 1942, Mexico City, Mexico), Mexican businessman and politician who was president of Mexico from 2000 to 2006. His term in office marked the end of 71 years of uninterrupted rule by the Institutional Revolutionary Party (PRI).

Fox, the second of nine children, was raised on a 1,100-acre (445-hectare) ranch in the state of Guanajuato, Mexico. He earned a degree in business administration from the Ibero-American University in Mexico City and later became a route supervisor for the Mexican unit of the Coca-Cola Company. After a series of promotions, he served as the company’s chief executive in Mexico and then head of its Latin American operations. In 1979, however, he resigned and returned to Guanajuato.

As Mexico’s economy struggled in the 1980s, Fox became convinced that the country needed new leadership, and he turned to politics. He joined the National Action Party (PAN) in 1987 and the following year was elected to the national Chamber of Deputies. After losing a controversial gubernatorial election in Guanajuato in 1991, he ran again and was elected in 1995. In 2000 Fox ran for president on a platform that focused on ending government corruption and improving the economy. At the polls he easily defeated PRI candidate Francisco Labastida Ochoa, and on December 1, 2000, he succeeded Ernesto Zedillo as president of Mexico.

Fox focused his early efforts on improving trade relations with the United States, calming civil unrest in such areas as Chiapas, and reducing corruption, crime, and drug trafficking. In 2001 his administration introduced constitutional reforms that strengthened the rights of Mexico’s indigenous peoples. Although the measures were ratified by the necessary number of Mexican states, seven other states—including Chiapas, where more than half the indigenous population lives—rejected them. Advocates for indigenous rights objected to amendments that required indigenous peoples to act in accordance with the constitution and that reduced their autonomy in some spheres. Leaders of the Zapatista National Liberation Army in Chiapas—who had made constitutional reform a condition of their return to peace talks—also opposed the new law. In economic affairs, Fox’s proposals, particularly his plans to increase taxes as part of sweeping reforms to stabilize the Mexican economy and banking system, met fierce resistance in the Mexican legislature, where the PAN lacked a majority.

There was significant progress early in Fox’s term toward bilateral cooperation with the United States on drug trafficking and illegal immigration, but the U.S. administration was skeptical of Fox’s calls for open borders with the United States and for the protection of the rights of undocumented Mexican workers (Fox was later criticized for statements perceived as encouraging illegal immigration). At the same time, Fox’s opponents faulted him for aligning Mexico too closely with the United States, a sentiment reflected in the vote of the Mexican Senate in 2002 to block a planned visit by Fox to the United States. The PAN’s lack of a majority in the Mexican legislature hampered Fox’s ability to secure enactment of his reform proposals. Although Fox’s personal popularity remained high, there was disillusionment with the slow pace of reforms, and farmers staged widespread protests over the perceived failure of the Mexican government to address agricultural inequities caused by the North American Free Trade Agreement. As a result, in the 2003 legislative elections the PAN suffered major losses to the PRI, further eroding Fox’s ability to push through his reforms. In 2004 Fox’s wife, Martha Sahagún de Fox, briefly considered seeking the Mexican presidency (Fox was constitutionally ineligible for a second term), but her potential candidacy aroused considerable hostility in the public as well as among political leaders. In 2006 Fox left office, succeeded by Felipe Calderón of the PAN.
Posted by HUMAN-i-TV at 1:48:00 PM