The 5th G.O.D. Awards announces its LIFETIME ACHIEVEMENT ON PHILANTHROPY and PUBLIC SERVICE AWARD Honoree in the illustrious personality of Honorable Kennedy Ohene Agyapong, Member of Parliament of Ghana. 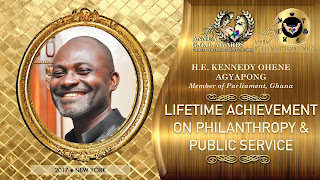 Princess Maria Amor, founder and president of We Care for Humanity and Chairman of the G.O.D. Awards declares: "Success is the survival of an adventurous maze. A meandering journey that one hopes, with much effort, will brew prosperity. Your Excellency’s indomitable perseverance in life’s twists and bends is laudable. The ability to execute of ideas, while being creative, taking risks, and with the vigor of enjoying life is nothing to overlook. You are no stranger to the qualities needed for success, as well as rectifying disparities for other to flourish as well.

You dedicated your life to become a politician to innovatively create opportunities and strengthen communities. The prelude of a great philanthropic leader is the discovery of true courage. A trait that cannot be measured by the absence of fear or heaps of victory but rather the urging to always try again amongst adversity. You lifted the people of Ghana by providing educational Assistance to pupils and students, mothers and children, job creation for numerous Ghanaians, School Building projects in Ghana and other countless contributions. Regardless of triumph or despair, it is the unwithering desire that is molded by the consensus to always try again for the sake of humanity.

Honorable Kennedy Ohene Agyapong, I have the great pleasure to announce that the G.O.D. Awards Committee have reached a unanimous decision to recognize His Excellency with LIFETIME ACHIEVEMENT ON PHILANTHROPY  AND PUBLIC SERVICE AWARD. It is our strong belief that your
accomplishments and distinct caliber of talents should be shared with at the United Nations, New York."

Agyapong Ohene Kennedy is a Ghanaian businessman, farmer and a politician born at Assin Domprem in the Central Region of Ghana on June 16, 1960. He holds a minority seat in parliament as member of the New Patriotic Party NPP, representing the Assin North in the Central region.

The Assin Domprem boy began schooling trying to catch up with his peers at age 16. He was in Form 1 at 11 year at Adisadel College in 1976.  Having closed the door on Adisadel College, he proceeded to Winneba Secondary School then on to Fordham University.

Today, Adisadel College is proud to have awarded him thrice during the school's 100th anniversary - a program he says Owula Mongotey was missing in action.

He holds a General Certificate of Education (GCE) ‘A’ Level which he obtained in 1983. He furthered to the Fordham University New York, USA.

He later worked at the Assin Farms as a Managing Director. He worked at the Super Care Group of Companies, He worked at the Hollywood Shopping Center, and He is currently the Member of Parliament for the Assin North constituency from January 2001 till date.
​
Agyapong is married with 14 children
Posted by HUMAN-i-TV at 6:48:00 AM