The 5th G.O.D. Awards announces its ASIAN HUMANITARIAN BUSINESSMAN OF THE YEAR in the illustrious personality of Mr. Abdulgani Macatoman, Founder & President of Global Empire International Group of Companies and Chairman at Foreign Chamber Council of the Philippines. 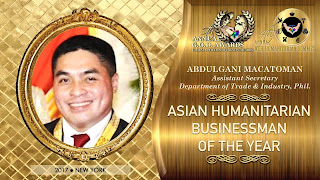 Princess Maria Amor, founder and president of We Care for Humanity and Chairman of the G.O.D. Awards declares: "The act of exchanging is the simplest yet purest way people remain prosperous. It has introduced us to different cultures since Mesopotamia nestled between the Tigris and Euphrates rivers. It teaches us humility and selflessness when we share our successes with others so that they may also stride towards it.

Abdulgani Macatoman., your successes in commerce has exchanged Filipino products and imported our culture throughout the world. It is even clearer that your humility and selflessness has brought happier lives for our children and a better future for all of humanity.
Your Excellency Abdulgani Macatoman, I have the great pleasure to announce that the 5th Global Officials of Dignity (G.O.D.) Awards Committee have reached a unanimous decision to recognize his excellency as ASIAN HUMANITARIAN BUSINESSMAN OF THE YEAR . It is our strong belief that your accomplishments and distinct caliber of talents should be shared with at the United Nations, New York."

He served as the Senior Adviser to the President of Philippine National Oil Company (PNOC-DMC) and as a Consultant in the OFFICE OF THE PRESIDENT OF THE REPUBLIC OF THE PHILIPPINES, Philippine Center on Transnational Crime (PCTC), and Office of the Chief of Philippine National Police (PNP-CHIEF). He is also a Certified Public Private Partnership (PPP) Consultant. He was Executive Officer in Department of Education (DepEd). He was designated as the Economic Bureau Chief of the Malay World Conference (DUNYA MALAYU) Malaysia.

Mr. Macatoman earned his Bachelor of Science in Business Administration BSBA Major in Accountancy (1991), Bachelor of Laws LLB (1995), and Master of Business Administration MBA (1999) at UNIVERSITY OF THE EAST, Claro M. Recto Manila and completed a Certificate course under the full-year Diploma Program in Real Estate Management (2013) from De La Salle-College of Saint Benilde.

Over the years, Mr. Macatoman has received numerous awards and citations for his outstanding contributions as an EXECUTIVE, BUSINESSMAN, CONSULTANT and a PUBLIC SERVANT. He is one of the Awardees of 8 most Influential Filipinos of 2012 by the Philippine Cancer Society (PCS), one of the Best Dressed Men of the Philippines, and among the 10 Outstanding Young Men of the Philippines (2012). Mr. Macatoman has been an awardee in Global Muslim Entrepreneurial Leader and Speaker at the 3rd Int'l Festival of Muslim Entrepreneurial Leaders on the topic "Chambers of Commerce Role in Business Development in the Phils & the Rest of the World" which was held last Feb.20-21, 2016 at Tehran, Iran. Winning the award over 17 Muslim countries making Phils. a world class entrepreneur.

Mr. Macatoman has been one of the Speakers of several prestigious international and local conferences. He discussed how our global economy today has become more functionally integrated and interdependent in the recent Organization of the Islamic Conference Malaysia (OIC-Malaysia). He has also deliberated on the global economy in Polynesian World Conference, KL Convergence, CACCI Conference, and World Economic Forum in Manila, Philippines and Auckland, New Zealand.
​
Mr. Macatoman is a member of the following associations: Iinvest Forum (Co-founder), Chamber of Real Estate and Builders Association (CREBA), Philippine Real Estate Festival (PREF), Philippine Contractor's Association(PCA), National Press Club(NPC), Philippine Chamber of Commerce and Industry (PCCI), Founding Member of Foreign Chamber Council of the Philippines(FCCP), and Partner with all Foreign Chambers of Commerce and Associations in the Philippines as their representative during the 45th Asian Development Bank(ADB) Board of Governors annual meeting held in Manila, Philippines May 2-5, 2012. He is the representative of the Foreign Chamber Council of the Philippines (FCCP) during the World Economic Forum (WEF) on East Asia held in Manila, Philippines May 21-23, 2014. He has been instrumental in improving trade relations between Philippines and countries like Turkey, Malaysia, Qatar, Saudi Arabia, Taiwan, India, Singapore, Finland, New Zealand, Guam, U.S.A, South Korea, Indonesia, China, Israel, Hong Kong, Iran, Uzbakistan, Egypt, Australia, germany, and others.

He has traveled 59 Countries and most of his Friends and Relatives fondly called him Gani.
Posted by HUMAN-i-TV at 5:14:00 AM