The 5th G.O.D. Awards announces 2017 SUPREME SPIRITUAL ICON OF THE YEAR in the person of His Holiness, the late Baba Hardev Singh Ji, the  4th Satguru of Sant Nirankari Mission. 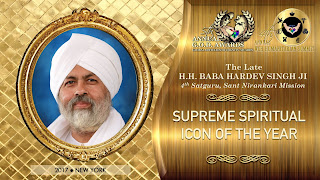 Princess Maria Amor, founder and president of We Care for Humanity and Chairman of the G.O.D. Awards declares: "Love is the greatest unifier and spiritual denominator for the soul of humanity. It is the moral compass that perpetually navigates us through the darkest of our days and transcends what our physical means cannot. For the greater portion of our lives, we struggle to find our wealth but a wealth that is greater than our brief existences is found in the accomplishments we make in life, in bettering ourselves and the ones around us. And while the future may be cast in shadow, faith is what keeps up moving forward when what lies ahead is unforeseeable.

The incredibly wonderful trait each individual has is the spirit to help realize the potential of the fellow human. His Holiness Baba Hardev Singh’s contributions to world has irrefutably won countless battles and will forever provide humanity a source of direction when needed.
​
The late Guru Baba Hardev Singh may no longer be with us but to live in hearts, we leave behind is not to die- Thomas Campbell. His Holiness Baba Hardev Singh’s compassion and love for humanity is embedded in our hearts and fellow Niranakri’s worldwide. I have the tremendous honor to declare that the G.O.D. Awards Committee have reached a unanimous decision to recognize His Excellency as 2017 SUPREME SPIRITUAL ICON OF THE YEAR. It is our strong belief that his accomplishments and distinct caliber of talent should be shared with and forever remembered before the global audience at the United Nations this 2017."

Early Life
Baba Hardev Singh Ji was born on February 23, 1954 in Delhi in the family of Baba Gurbachan Singh Ji and Rajmata Kulwant Kaur Ji. As a child, Hardev was very fortunate to have worldly as well as spiritual blessings of his parents and also the then Satguru Baba Avtar Singh Ji and Jagatmata Budhwanti Ji as his grandparents.

With the growth of child Hardev, grew his thoughtfulness and sobriety. He saw every object and observed every event with due curiosity but used to keep silent. Respect and regards for elders and the trait of humility could be noticed in him from the very childhood. Interest in congregations and listening to discourses of Satguru also became conspicuous in him. The kind and pure hearted child Hardev was never found spendthrift and emotional.

Baba Hardev Singh Ji received his elementary education at home. Thereafter, he studied ats Rosary Public School, Delhi. In 1963, he was sent to the Yadvendra Public School, Patiala, a boarding school and an institution of national fame, from where he passed the high school examination in 1969. His co-operative and compassionate nature made him popular with the teachers and the fellow-students alike. His school education was equally supplemented and cemented with spiritual touch received through the letters of his affectionate mother, Rajmata Kulwant Kaur Ji. During his stay in the school, he also developed keen interest in mountaineering. This hobby added the trait of patience and perseverance in his life. He was never found tired or worried. He was also very skilful in vehicle driving, horse-riding and took keen interest in photography.

On completion of his school education at Patiala, Baba Hardev Singh Ji returned to Delhi and started further education under Delhi University and also took keen interest in the socio-spiritual activities of the Mission. He became very regular in congregations (Satsang) and service to others (Sewa). His humility earned him the name 'Bhola Ji'. In 1971, He joined the Nirankari Sewa Dal as its primary member and enjoyed himself serving in cotton Khaki (brown) uniform. He organized "Youth Forum" in 1975, which focused on promoting truthful and simple living, service with devotion and love, refraining from incurring undue expenses and practicing prohibition.

On the eve of the 28th Annual Nirankari Sant Samagam in Delhi, on November 14 in 1975, Baba Hardev Singh Ji was married in a simple ceremony to Savinder Ji, daughter of devoted saints Shri Gurumukh Singh Ji and Smt. Madan Ji of Farrukhabad, Uttar Pradesh. Born on January 12, 1957, Savinder Ji was well educated and duty conscious.


Spiritual Mentor
Baba Hardev Singh Ji became the spiritual mentor of the Mission when its Spiritual Master and a crusader for unity, peace and truth Baba Gurbachan Singh Ji had fallen to the bullets of some fanatic elements on April 24, 1980.
Immediately after the cremation of the mortal remains of Baba Gurbachan Singh Ji at the electric crematorium in Delhi on April 27, 1980, Young Hardev was greeted and hailed as the Head of the Mission and everybody present witnessed the Satguru already manifested in Him.

Peace
Baba Hardev Singh Ji, who was known for his calm nature, addressed the devotees as a perfect Spiritual Master. He said "Baba Gurbachan Singh Ji's martyrdom is the will of God. Perceptions differ from people to people. The ignorant say that it may lead to bloodshed but the devotees believe that being a supreme sacrifice, it shall usher in peace and harmony." He ruled out even the remotest thought of vengeance saying that 'it would go contrary to what Baba Gurbachan Singh Ji lived and sacrificed his life for'. He exhorted devotees to carry on His message of compassion, goodwill, love, truth and peace and pray for the welfare of one and all.

The result was quite instantaneous and healthy. The devotees remained non-violent even in the face of serious provocations from fanatics. And when the day (24th April) came in 1981, Baba Ji ordained it to be observed as Manav Ekta Divas (Human Unity Day) and not as Martyrdom Day. The first holy discourse by Baba Hardev Singh Ji had far greater and much deeper significance and from the message contained therein, one could understand his vision of peace for the time to come. He gave call to His devotees to continue to spread the message of love and peace and pray for the goodwill of all.
Posted by HUMAN-i-TV at 12:16:00 PM