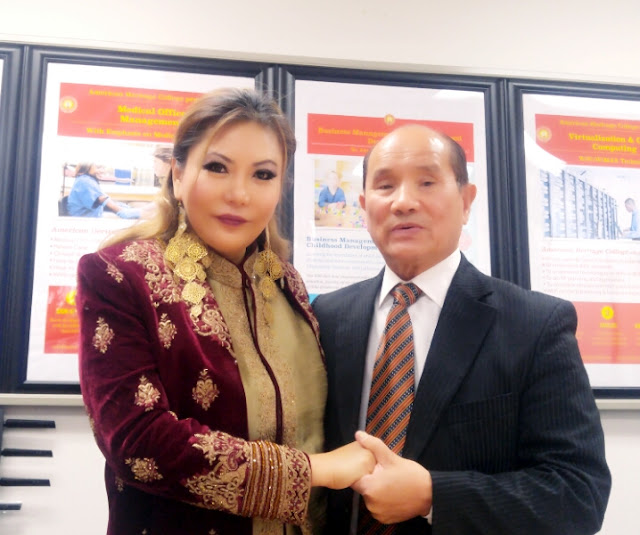 Orange County, CA – The thing about post-Thanksgiving dinners is, they bring a myriad of reasons to give God credit for each and every single blessing that was received and are to be received, which the Calvinist saw as directly stemming from the will of God. On a star-lit Saturday night last November 25, 2017 at Moon Light Restaurant and Banquet, approximately 2000 people had gathered and celebrated Thanksgiving with International world leaders, businessmen, educators, religious groups and just ordinary citizens wanting to witness the change in the world through humanitarian efforts and movements.

Princess Maria Amor Torres was invited to speak in front of the entire thankful and hopeful crowd and she never disappoints through her humility and sincerity as she speaks out of the abundance of her heart. In fact, her heartfelt speech about teamwork, her plans, and vision for humanity resonated with the audience, which shifted the atmosphere of celebration of giving instead of Thanksgiving alone. The night so unexpectedly became a celebration of generosity and gratitude. The speech was so beautiful it turned out to be the talk of the night and the next, encouraging Mr. Vo van Thanh, an American-Vietnamese Veteran, to donate his life insurance policy amounting to $100,000.00. According to Vo, his life insurance was meant for his daughter, but her daughter declined the gift and just asked him to give it to a more useful cause. Isn’t this just a surreal moment for humanity? Great hearts exist and so does God speak volumes through such a deed.

Why don’t we have a glimpse over the life of Vo van Thanh?

Thanh graduated from the Vietnamese Military Academy sảme ás West Point military in the USA. He was a group commander of 305 heavy boats. He is a true leader by nature. He was also once a City Councilman in Saigon. He is a licensed Real Estate broker/agent since 1978. He is a principal, teacher and the owner of California Real Estate School in the beautiful City of Westminister. Hundreds of students become came to success as brokers and agents because of Vo’s heart to share his knowledge about the business of Real Estate. Up to this day, he is still an active RE broker and now, a full-fledged philanthropist.

“Lots of lives will change because of this donation. Thank you for partnering your good heart with WCH missions. This is nothing but an extraordinary gift received in such an extraordinary occasion. My heart is so appeased knowing that there are still people like Thanh Vo, whose heart is brave, selfless and is dedicated to humanitarian causes. I live for moments like these. Not the amount, not for the paper money, but the deed is completely satisfying let alone humbling. I give God credit for good hearts like Vo’s-a blessing to humanity in its very essence. May this deed be an inspiration to all mankind to step forward and do an act of kindness and serve humanity.” – Maria Amor