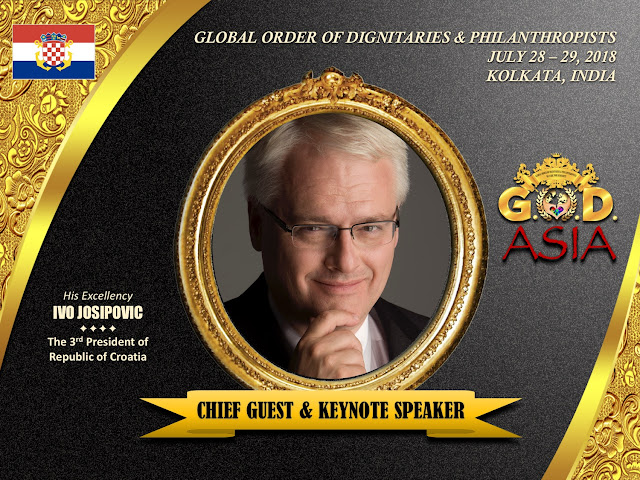 Known for campaign of protection of individual rights and promotion of fundamental values such as equality, human rights, LGBT rights, justice, diligence, social empathy and creativity,  His Excellency Ivo Josipovic  is widely admired for his advocacy for Human Rights and Fight Against Corruption and Social Injustice.

The 3rd President of the Republic of Croatia, H.E. Josipovic is scheduled to arrive in India at the end of July to play a big role as CHIEF GUEST, PRESENTER and KEYNOTE SPEAKER at the G.O.D. Asia in Kolkata, India this July 28-29, 2018. His Excellency is will join the other luminaries and esteemed guests, the 1st President of Kosovo, Fatmir Sedjiu, the 10th President of Bangladesh, H.E. Hussein Muhammad Ershad, the Royals of Cambodia, Ghana, India, Philippines and many more!

"I had the honor of visiting His Excellency Ivo Josipovic in Zagreb and shared a meal with him. It was one of the most memorable experiences I had with a former head of state, and totally blown away by his humility and intelligence. Our conversation focused around the history of Croatia, his presidency and global issues. The President gave such invaluable insights to many problems that humanity is facing. He continues to serve humanity by teaching young people in the university and sharing his love for music." admiringly said by Princess Maria Amor.

Josipovic assures the chairman of G.O.D. Awards of his highest consideration, "The world needs more humanitarians to come together to solve global issues. It would be an honor for me to join hands with Princess Maria Amor and We Care for Humanity to tackle important issues the world is facing right now, and to recognize those who have done great impacts to to humanity."

Josipović's parents, originally from Baška Voda, a small town near Makarska in Dalmatia, had moved to capital Zagreb in 1956, about a year before he was born.[9] As a high school student, Josipović attended both the V. Gymnasium and a secondary music school in Zagreb from 1972 to 1976.[9] As a teenager he was a promising football player. He is married to Tatjana, a civil law professor and legal expert. They have one daughter, Lana.

Apart from his native Croatian, he speaks English fluently and has some understanding of German.

Law
Ivo Josipović attended the Faculty of Law of the University of Zagreb, from which he graduated passing his bar examination in 1980. He completed his MA in criminal law in 1985 and his PhD in criminal sciences in 1994. He began as a lecturer at the same law faculty in 1984, and has since become a Professor for criminal procedure law, international criminal law and misdemeanour law.

Josipović composed some 50 chamber music pieces for various instruments, chamber orchestra and symphony orchestra. In 1985 he won an award from the European Broadcasting Union for his composition "Samba da Camera" and in 1999 he was awarded the Porin Award for the same composition, which was followed by another Porin Award in 2000 for his piece titled "Tisuću lotosa" ("A Thousand Lotuses"). His most successful pieces also include "Igra staklenih perli" (The Glass Bead Game) and "Tuba Ludens". These pieces are performed by numerous musicians in Croatia and abroad. Since 1991 Josipović also served as director of the Music Biennale Zagreb (MBZ), an international festival of contemporary classical music.

During the 2010 election campaign Josipović announced that as president he will compose an opera based on the murder of John Lennon.

Film
Josipović was interviewed in Boris Malagurski's documentary film The Weight of Chains 2 (2014). Ivo Josipović lent his voice to the third film of the Toy Story series and in a short animated film "Night and Day". Josipović at the beginning of the film pronounces the sentence, in Croatian, 'Best things in life are unknown, turn to new things'. Opening the Pula film festival, in 2014, President Josipović called for the audience to enjoy movies and art. 'For some, film is the most beautiful and noble fraud, while for some, filmmakers are magicians. Indeed, they put in a big hat under the stars a lot of important spices and most importantly the talent and love for the art', said Josipovic.

Victory speech of Ivo Josipović on 10 January 2010.
In 1980 Ivo Josipović became a member of the League of Communists of Croatia. He played a key role in the democratic transformation of this party as the author of the first statute of the Social Democratic Party of Croatia (SDP). In 1994, he left politics and the SDP, dedicating himself to law and music. Upon the invitation of Ivica Račan, acting Prime Minister at the time, he returned to politics in 2003, and became an independent MP with the SDP and Vice-President of the SDP Representatives' Group in the Croatian Parliament. During his mandate in 2005, he was also a representative in the Assembly of the City of Zagreb. In 2007, he was re-elected to the Croatian Parliament. He formally renewed his SDP membership in 2008. On 12 July 2009 he was elected as the party's official presidential candidate. As MP he served on various parliamentary committees dealing with legislative, judiciary and constitutional questions, as well as for defining parliamentary rules of procedure and the political system.