Anuradha Koirala To Be Honored as Human Rights Icon of Asia by G.O.D. Asia this July in India 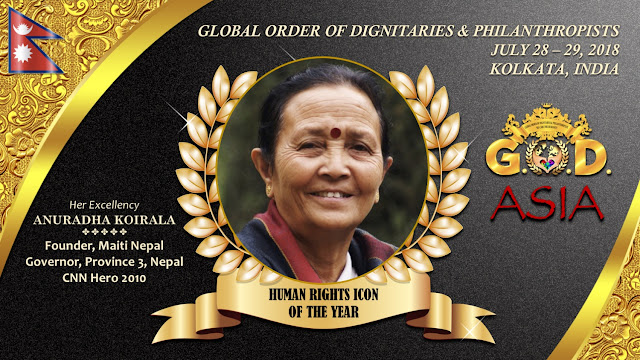 Human trafficking in Southeast Asia have been a long nightmare in the region and still is prevalent today caused by universal factors such as poverty and globalization.  Many nations within the region have taken preventative measures to end human trafficking within their borders and punish traffickers operating there. In Nepal, ending human trafficking has been the plight of one woman named, Anuradha Koirala or "Dijju" (elder sister) to the children and youth she had rescued from the hands of perpetrators and organized crimes.

Ms. Koirala, Founder of Maiti Nepal who is also the current Governor of Province 3 of Nepal is being honored as HUMAN RIGHTS ICON OF ASIA by G.O.D. Asia  in Kolkata, India this July 28-29, 2018. Koirala is also expected to speak at the WCH Humanitarian Summit along with the luminaries and esteemed guest: 3rd President of Croatia, Ivo Josipovic, 1st President of Republic of Kosovo, H.E. Dr. Fetmir Sejdiu, the 10th President of Bangladesh, H.E. Hussein Muhammad Ershad, the Royals of Cambodia, Ghana, India, Philippines and many more!

"I have great respect for the Honorable Governor Koirala for the very noble mission she has been advocating almost all her life. I saw her being honored by CNN Hero in 2010, she moved my heart and since then she became one of my inspirations in doing what I am doing now for humanity.

I also had the pleasure of visiting Maiti Nepal this year and it was a wonderful experience meeting the survivors of human trafficking under Korairals' care. She really made tremendous impact to these people's lives ."- Princess Maria Amor

Born in 14 April 1949 to Colonel Pratap Singh Gurung and Laxmi Gurung, Anuradha (Gurung) Koirala was brought up in a family that regarded providing services for humankind as the best form of pious work. She studied in Saint Jospeh Convent School Kalimpong, India. At the school, sisters and mother further increased her devotion towards the social work.

For more than twenty years, she taught English at various reputed schools of Kathmandu. Mother Teresa was biggest source of inspiration to instigate a mission for the betterment of humankind. Therefore, in 1993 Ms. Koirala founded Maiti Nepal with the aim of providing services for both children and women who have endured untold pain and suffering, often in silence. Children, girls and women were being trafficked within and from Nepal for commercial sexual exploitation. She set up Maiti Nepal with a vow to put an end to this heinous crime.

After establishing Maiti Nepal, she plunged into the service of humanity. Her first work was setting up of a rehabilitation home so she could provide a home to who have nowhere else to turn to. Now, Maiti Nepal has three prevention homes, nine transit homes, two hospices and a high school.   More than one thousand children are getting direct services from Maiti Nepal everyday.

So far, Anuradha has been provided 34 national and international awards in recognition of her courageous acts and lifetime achievement furthering the cause of children’s and women's rights. Her achievements include liberating more than twelve thousand girls from brothels, providing Anti Retroviral Therapy before the government of Nepal could initiate this process. Due to her continues struggle, Government of Nepal recognised anti trafficking day, which falls on 5 September.  This endeavour was initiated by Maiti Nepal.

Ms. Koirala loves spending time with children, they say that they get a warmth of a mother and a father. She is self-motivated person relishing new and dynamic challenges with a leadership role if required in a team environment or independently.

“The sole aim of my life is to end women and child trafficking and I’ll go to any extent to achieve my goal,” says Anuradha. At 70, the indomitable spirit in Anuradha dreams of a day when Maiti no longer exists. “Maiti ceases to exist the day human trafficking ends. And, that is the only dream that keeps me going,” says Anuradha, brimming with hope, a hope born out of the conviction that it is possible to make this world a sparkling, safe and peaceful place for women and children.