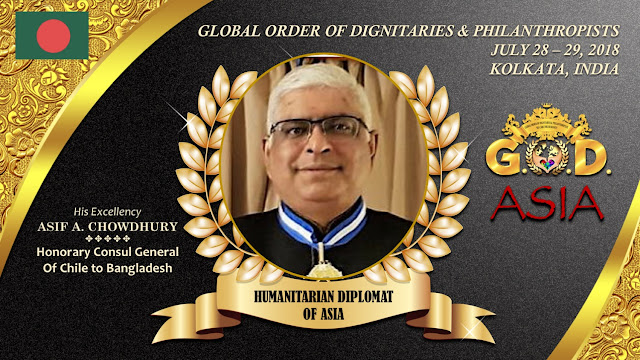 Asif A. Chowdhury has dedicated the better part of his 27 year career pursuing and accelerating progress in international business and trade. Appointed as Honorary Consul General of Chile in Bangladesh, Asif balances his life on family, diplomacy, business and philanthropy.

On July 28-29, 2018, Consul Asif Chowdhury will be honored as HUMANITARIAN DIPLOMAT of ASIA by the Global Order of Dignitaries and Philanthropists (G.O.D.) Awards  at the Westin Kolkata, India. Chowdhury is also expected to speak at the WCH Humanitarian Summit along with the luminaries and esteemed guest: 3rd President of Croatia, Ivo Josipovic, 1st President of Republic of Kosovo, H.E. Dr. Fetmir Sejdiu, the 10th President of Bangladesh, H.E. Hussein Muhammad Ershad, the Royals of Cambodia, Ghana, India, Philippines and many more!

"On my visit to Bangladesh,  H. E.. Asif A Chowdhury Consul for Chile in Bangladesh kindly escorted me to the children’s school and orphanage Help the People Foundation, where their mission is also to set up a hospital for the poor. Consul Chowdhury donated a new colorful rickshaw and I was delighted to be given a ride in the rickshaw. This smart way of giving sustainable donation to the school is very commendable and should set as an example to follow by others!", narrated by Princess Maria

Mr. Asif  A. Chowdhury supports PFDA Parents Forum for the Differently Able.  This Center is the first ever-such initiatives in Bangladesh to help the autistic and brain damaged achieve their potential.

In 2014, Mr. Chowdhury received the Bernard O'Higgins Award, the highest Chilean Civilian Distinction given to a foreign national by the President of the Republic of Chile, for his contributions and two-decade-long commitment to the areas of international business and trade.

He is also the recipient of 2017 GUSI Peace Prize Award for his untiring effort, working for people’s amelioration, to find peaceful solutions for people’s welfare by promoting peace through Economics and  Humanitarianism. Received CONSULAR MERIT of ORDER (CMO) by Brazil on January 2018. The FICAC Medal of Honor in Prague, and The Financial Mirror- Robintex Business Awards are a few of the many ‘earned’ distinctions Mr. Chowdhury has received over the course of his career.

Chowdhury shares a deep passion for both domestic and international business affairs while enjoying classical music, travelling, and performing charitable and humanitarian work in his spare time.  His Excellency. Asif A Chowdhury the Consul for Chile in Bangladesh, a great diplomat, philanthropist, entrepreneur and humanitarian, has traveled the world promoting global peace and trade. His good works and honors are numerous. His thoughts are always with the poor and underprivileged children as were his  great grandmothers.

Mr. Asif A Chowdhury is the Chief Patron of Mathiara Government Primary School which was founded by his great grandmother 100 years ago. His Excellency recently donated
stationary and sports equipment to the school. Recently with the permission from the Bangladesh government Mr. Chowdhury is constructing two class rooms equipped with all modern facilities for the growing students needs.
Posted by Unknown at 11:52:00 AM