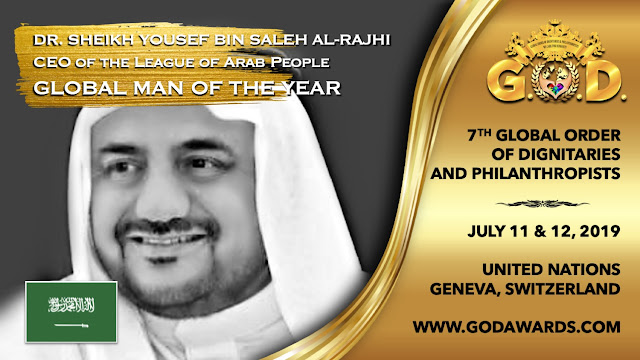 The Global Order of Dignitaries and Philanthropists (G.O.D.) Awards, now on its 7th year announces the 2019 Global Man of the Year Award is being bestowed to His Excellency DR. SHEIKH YOUSEF BIN SALEH AL-RAJHI, Chairman of the League of Arab People, a businessmen, an honorary Doctor,  President of Sheikh Youssef bin Saleh Al Rajhi Commercial Investment Company and son of the late Sheikh Saleh Al Rajhi – May Allah bless his soul (founder of Al Rajhi Bank).

“Sheikh Al-Rajhi’s contribution to humanity is paramount. Aside from the social investments he and his family have established in the Middle-East and all over the world, he never fails to continue the legacy of his father where the bulk of his wealth has been allocated in social developments, education and championing entrepreneurship.”, said Princess Maria Amor, founder of We Care for Humanity (WCH) and creator of the G.O.D.  She continues, “We believe that there’s no accolade in this world worthy of giving to such an altruistic person like Sheikh Yousef Bin Saleh Al-Rahji, but we hope that the 2019 Global Man of the Year Award is befitting even half of his philanthropic attributes.”

The Sheikh is expected to address the audience of the United Nations, Geneva on the topic: “Sustainable Humanitarianism Towards the United Nation’s 2030 Agenda” and will be joining some of the Panel Sessions on Sustainable Development Goals under the WCH Humanitarian Summit alongside Honorees and Keynote Speakers: H.E. Felix Tshisekedi, President of Democratic Republic of Congo, H.E. Sheikh Hasina, Prime Minister OF Bangladesh, H.E. Rupiah Banda, the 4th President of Zambia and H.E. Ivo Josipovic, 3rd President of Croatia.

The 7th G.O.D. is convened at the United Nations, Palais des Nations, Switzerland on the 11th and 12th of July 2019 and is hosted by WCH in partnership with the Permanent Mission of Vanuatu and other International Organizations in Geneva. More than 50 country representatives are expected to arrive in Geneva for this function with the help of its philanthropic partners: Triton Solar LLC, SREI Foundation, Imagine TV and a major sponsor who wish to be Anonymous.

The magnanimous event is integrated with a Charity Dinner Gala at the historic Intercontinental Hotel featuring a world class entertainment by the renowned Space Opera Diva, Evgenia Laguna.  Proceeds of the event will be used for restoration of Kam Pushum Hed Clinic in Port Vila and procurement of new Kidney Dialysis Machines. 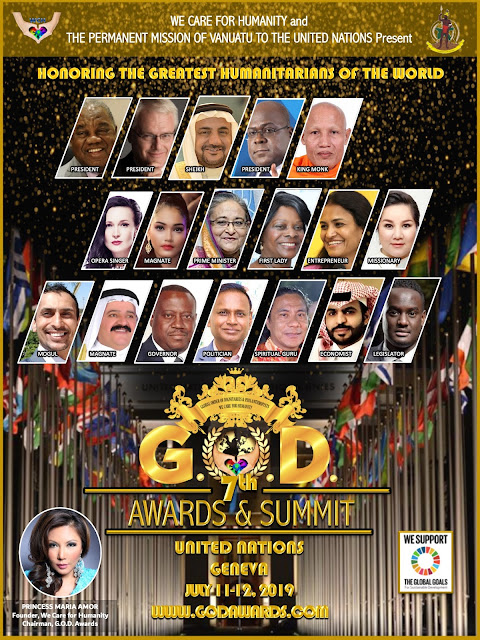 *Founded by Princess Maria Amor (aka Traveling Princess) more than half a decade ago, the G.O.D. Awards has been revering tributes to the world’s greatest humanitarians who have made unprecedented impact to humanity and gathering a conglomeration of Dignitaries, Philanthropists, Royals and Faith Leaders to work hand-in-hand towards Universal Humanitarianism, which is integrated with WCH Humanitarian Summit is a joint effort to answer the sonorous call to innovate and advocate sustainable solutions to global issues and solve even the most arduous obstacles that hinder prosperity while harmonizing with the 17 UN Sustainable Development Goals (UNSDG). This year’s agenda is themed “Sustainable Humanitarianism Towards the United Nation’s 2030 Agenda” which will focus on Education, Health, Climate Change and Human Rights.